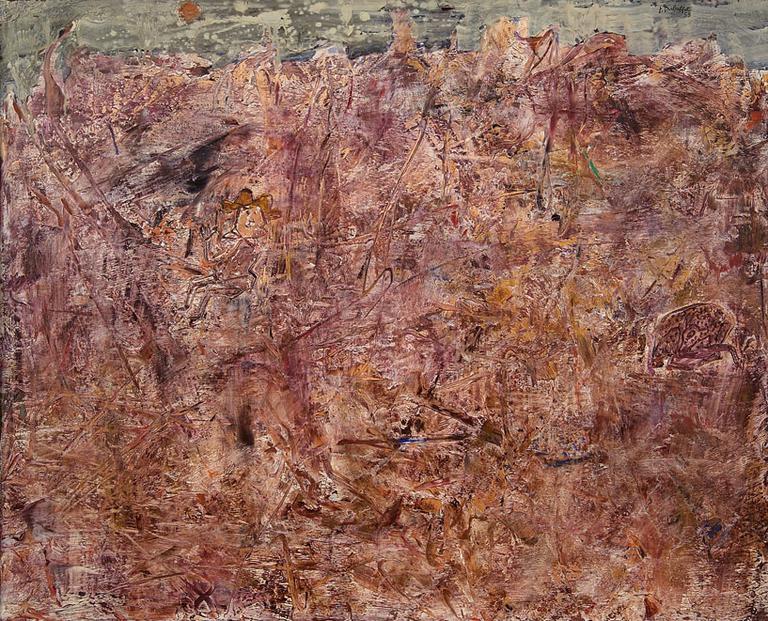 By giving a precise - and carefully chosen - title to his paintings, Jean Dubuffet liked to classify his works, because, perhaps, he was himself unclassifiable : with Bacon, Balthus and Giacometti, one of the four great "irregulars" of the twentieth century, as Jean-Luc Chalumeau names them (Histoire de l'art contemporain, Paris, 2004). Le Chevrier Ventru is one of the first paintings in the series of "pâtes battues", which of the largest, La Vie affairée (The Busy Life), can be seen at the Tate Modern in London.

Dubuffet wrote about them in an almost greedy way : "These paintings are made with a smooth and clear (almost white) paste, quite thick, spread roughly and quickly with a coating knife on top of previous fresh and strongly colored layers, so that the various colors of the underside can be seen in the gaps of the paste that covers them, tinting it locally." Then he speaks about the drawing, but always in connection with the matter : "It is the same pleasure which leads the hand of the one who traces some very hasty drawing, or some written word, on the fresh plaster of a wall or the freshly smoothed cement of a ground." One thinks of Basquiat, of whom René Ricard (Artforum, December 1981) wrote that he combined "the elegance of Twombly and also the primitive side of the first Dubuffet"... who was however old enough to be his grandfather.

Our goat of 1953, on the right of the painting, appears in 1949 in a sketchbook (Timimoun III) made in Algeria, in a region of ochres, oranges and reds, of sediments and fossils, which the artist remembers here... A devious animal, more or less diabolical, seriously destructive, is basically the natural emblem of the rebel that Jean Dubuffet was. But this rebel was also, and above all, a madman of painting, this one and some others benefited from a particular finishing consisting of "lightly stroking the painting, after it was dry, with a large flat brush, with tones (golden, bistre, etc...) which bound the whole, bathed the whole in a monochrome golden glitter". Dubuffet, taking our painting as an example, remarks "that it would be necessary to find for these new ways of painting a generic title which is appropriate to them (...). I want to speak about paintings of the kind of le Chien jappeur, le Chevrier ventru, l'Ombre du soir, la Campagne noyée d'ombre, etc... ". Therefore, we will speak of a beaten paste " stroked ".

But beyond the technique and the exegesis, there is in this painting a magic, a mystery, which echo the words of Herta Müller, recent Nobel Prize for Literature, speaking of the landscapes of the Carpathians : "I do not know what gives the grayish pink such a seductive and captivating beauty" (Atemschaukel, Munich, 2009). This is perhaps why this painting remained until 2010 in the same family that had bought it in 1953 from René Drouin, Dubuffet's first dealer...