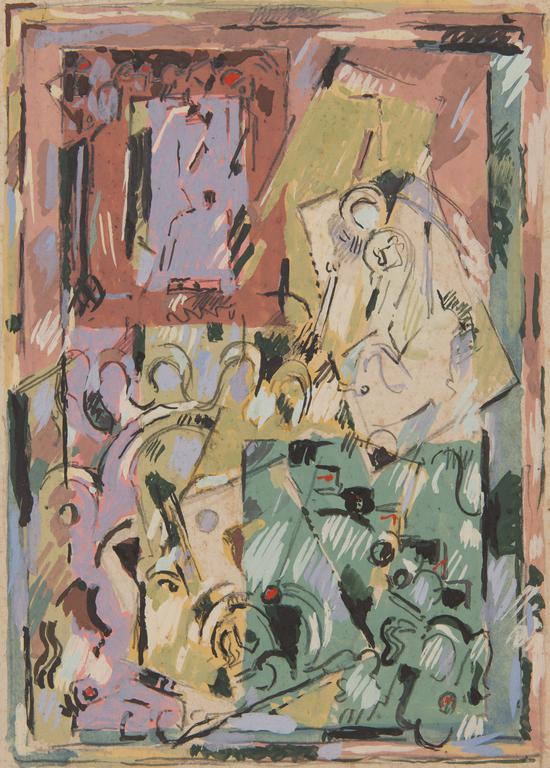 Study for the Fall of Babylon

Gouache and pencil on cardboard ; stamp of the workshop on the back of the original mount ; 14.7 x 10.5 cm

Albert Gleizes, like Georges Rouault, was a fundamentally independent artist, imbued with mysticism, passionate about reflection on the ways and means of art. He was, with Jean Metzinger, the first theoretician of cubism (Du Cubisme, Paris, 1912) and in La Forme et l'Histoire (Paris, 1932), he explains that architecture is the basis of all art.

The dual influence of Romanesque architecture and analytical cubism can be seen in this preparatory gouache for a huge canvas (360 x 265 cm) that was lost in the early 1950s after it was exhibited at the Palais des Papes in Avignon and then at the Musée National d'Art Moderne in Paris.

Deeply affected by the coming of the war, the painter produced two very large paintings between 1939 and 1940, on the subjects of the Fall of Babylon (now lost) and the Pope and the Emperor (Lyon, Musée des Beaux-Arts).

Basically, these two themes irrigate the thought of the Middle Ages, from the great fear of the year 1000 to the sack of Rome in 1527. The fall of Babylon is a prefiguration of the Apocalypse, and the sack of Rome by the troops of Charles the Fifth, a crucial moment in the history of christianity and western art, a repetition of the fall of Babylon : the gigantic construction of St. Peter's Basilica echoing the one of the Tower of Babel ; and the protestant schism, challenging the latin liturgy, to the division of peoples resulting from the confusion of languages.

In the form, Albert Gleizes was inspired for the first of these two paintings by a miniature of the Hortus Deliciarum of Herrade de Landsberg, one of the most interesting illuminated manuscripts of the 12th century, lost in the fire of the Strasbourg library in 1870 but known by copies, and for the second by italian altarpieces from the 14th and 15th centuries.

Therefore the importance of this gouache of a remarkable freshness and more compact than another of the same subject, sold in 2004 (Piasa, December 8, 2004). It reproduces and reorders the layout and colors of the german miniature, which represents the fall of Babylon in the allegorical form of a monstrous beast (the great prostitute of Babylon) struck down by the angels. The square of spectators can be seen at the top left ; at the top right, two angels, identifiable by their halos, plunge their spears downwards towards the beast ; at the bottom right, the dying beast. Confusion prevails, in the minds, but it is sublimated, on paper, by an aesthetic of order.