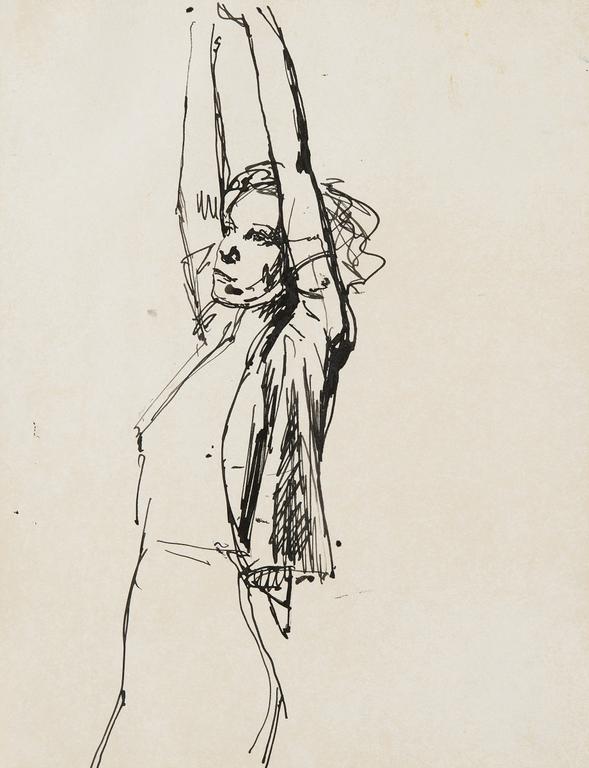 Study for The Mountain

Balthus is a marginal and occasional painter, who created only a little more than 300 paintings in a life covering almost the entire twentieth century : by a meticulous technique, a stubborn devotion to figuration, the constant reference to ancient painting. However, Picasso, the capital artist, just the opposite, bought since 1941 Les Enfants Blanchard (Blanchard's Children), a painting dated 1937.

This drawing, preparatory to La Montagne (The Mountain - New York, Metropolitan Museum), is also dated 1937. Balthus wrote that it was a "key painting in his work" (letter to James Thrall Soby, 20 June 1956). In the center of this painting the same young girl is represented, her arms raised, alone, linking earth to sky in an immense high-altitude landscape where the figures stand out against the mountain, and the mountain against the sky, in three bands of shadow, light and blue.

It was again in 1937 that this young girl and Balthus got married. It was Antoinette de Watteville, from one of the oldest families in Bern, whom he, the bohemian child, had been courting in vain for years. The landscape of La Montagne is, moreover, the one, recomposed, of the Bernese Oberland.

Rarely the expression "on the spot" has been more accurate : what vivacity, both in the gesture of the model and in the gesture of the draftsman. Two differences with the painting : she is dressed in a peasant dress (with a bag slung over her shoulder) which does not show any of her buttock curves ; and she bows her head slightly, turned towards the viewer, without really looking at him. She is less lively, more mysterious.

There is in this drawing a reminiscence of Rembrandt "sketching" Saskia his young wife. And more strangely, a handwriting that reminds us Giacometti in his copies of the past. Balthus had met Giacometti shortly before, forming a friendship that would last 30 years, nourished by their differences and their common love of art.