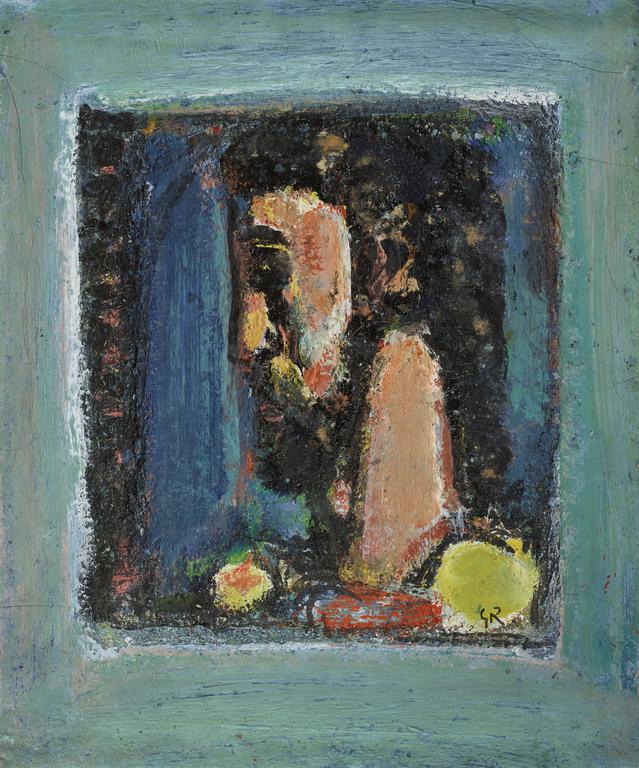 Sjraar van Heugten, Avant-gardes, 1870 to the present : The Collection of the Triton Foundation, Brussels, Mercatorfonds, 2012, p. 561.

The great Italian art historian Lionello Venturi, one of the first to study Rouault, distinguished "two periods of his life in which his happiest creations take place (...) : from 1903 to about 1912, the time (...) of rebellion" and then "from 1930 to 1939, the period of regained serenity" when the colors "multiply, they brighten, they sing" (Gants du ciel, Montreal, 1944).

In this oil on board datable to 1935-1936, the Christ is indeed more peaceful than suffering, with a quiet hieraticism reminiscent of Modigliani's sculpture – another artist that Lionello Venturi defended. The sapphire blue background, the pastel blue frame, the brightness of the lemon yellow, the vermilion line, halo the figure of the Christ with a naive joy that seems to come straight out of the first chapter of the Gospel according to St. John : "And the Word became flesh, and dwelt among us, and we beheld his glory." Rouault rediscovers the magic of icons.

The Triton collection, from which this painting comes from, was formed at the end of the last century by Willem Cordia, a Dutch shipowner - nicknamed in his country "the Onassis of Rotterdam" – who was a great art lover. With the support of his wife Marijke, he generously lent his treasures to museums.