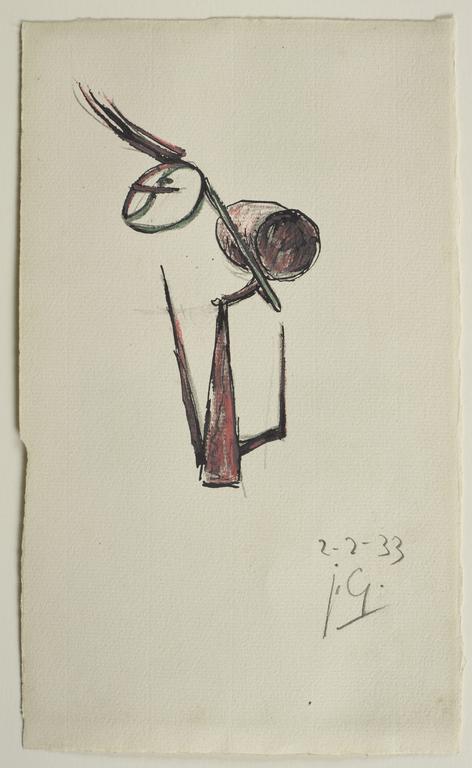 Study for a Sculpture

This drawing, dated 2nd February 1933 and presented in 1983 in the magnificent Julio González exhibition at the Guggenheim Museum in New York, is close to another drawing, Tête étrange (1932) in the Museo Reina Sofia in Madrid. Known as Étude pour le Rêve / Le Baiser, a 1934 sculpture whose the wrought-iron original is in the Centre Pompidou, but which is also similar to another, Les Amoureux II (1932-1933), it seems more appropriate to call it simply Study for a Sculpture.

The artist is mentioned on the last page of Rudolf Wittkower's work, Sculpture : Processes and Principles : "Julio González was a pioneer in the use of welded iron. Picasso, Calder, (...) many others followed, inaugurating, in the 1940s and 1950s, a new age of iron." This shortcut has given way to a more complex view of González's role and his relationship with Picasso.

Josephine Withers, a specialist of the artist, has shown how their collaboration, from 1928 to 1932, made González a true artist, and Picasso the sculptor we know : creating pieces of work based no longer on modelling but on assembling, and more often on assembling "found" objects - an aesthetic also found in this drawing. The art critic Hilton Kramer has compared it to the "invention" of cubism in painting and juxtapose the role of González and the one of Braque : a form of discipline and sensitivity that balanced the instinct of Picasso's genius.

Finally, the great art historian Rosalind Krauss emphasised the importance of drawing in González's work : "a constant need to draw and often to draw from nature." But then the drawing, becoming sculpture, abstracts itself from nature. González defined sculpture, in an article in the Cahiers d'art in 1936, as "a drawing in space", a drawing on a sheet of paper that is not white but empty. This new freedom of sculpture is vividly expressed in this work.