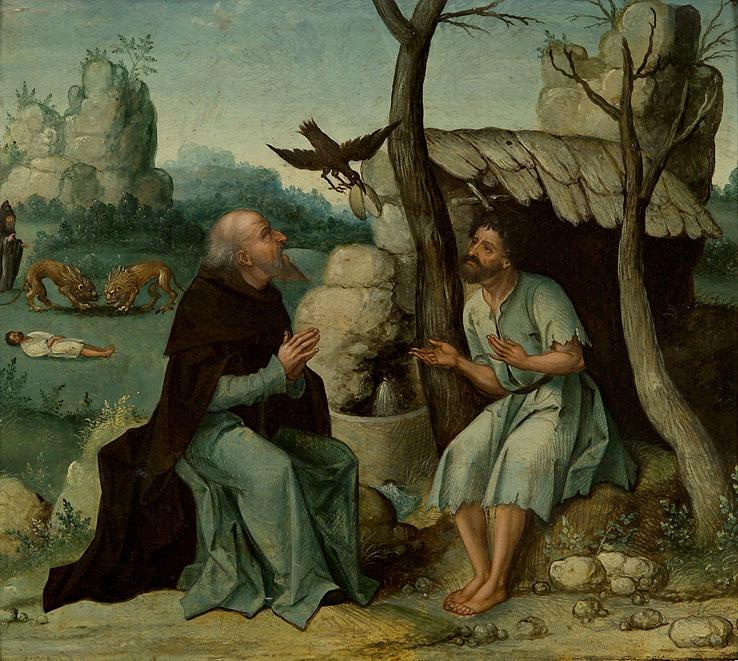 Peter van den Brink, director of the Aachen Museums, identifies the author of this painting with the painter of the painted shutters of the Altarpiece of St. Anthony in the church of Kempen, a small German town near the Netherlands. He identifies him as a disciple of Jan van Dornicke (also known as the Master of 1518), one of the leading Antwerp Mannerists. However, what is attractive here is rather the clarity of the scene, the care taken to composition and the harmony of the colors. In the early 16th century, Antwerp Mannerism was a trend adopted by all, and exported, but it did not really catch on, or not for long.

It is true that the painter borrows the rock on the right from the Crucifixion Triptych by Jan van Dornicke (1520) in the Sao Paulo Museum.  But he also uses the left rock from the background of the Nativity by Adrien Isenbrant (ca. 1520-1530) in the Basel museum : an anti-mannerist work from Bruges.... Finally, he pays his debt to their common master, Gérard David, whose he borrows concentration and simplicity. In short, he skips a generation, the mark of a recessive nature... but not a retrograde one because he is inspired, for the character of Saint Paul, by the engraving of Adam and Eve by Lucas of Leyden (1508). Is there a message in the fact of giving to the first hermit the posture of the first man?

Saint Anthony Abbot, healer of infectious diseases, especially skin diseases, was often represented in the Middle Ages and the Renaissance. More often the temptation of Saint Anthony, with devils and prostitutes, than the meeting of Saint Anthony and Saint Paul Hermit, more austere... According to the Life of Saint Paul Hermit written in the fourth century by Saint Jerome and included in the Golden Legend, Saint Anthony visits him in the Egyptian desert (here reduced to a landscape without habitation). They sit by a spring. A raven brings them a bread. Saint Paul explains that the raven usually brings only one half of the bread... Later, Saint Anthony returns to bury Saint Paul. Two lions dig the grave. The two scenes are represented here, in foreground and background, the difference in space replacing the difference in time.

The panel does not appear to have been part of an altarpiece and is in good condition, revealing the underlying drawing in a few spots. Far from the hallucinated vision of the same scene offered by Grünewald's Issenheim Altarpiece (1515) in the Colmar museum, we have here a humble and precise narration : perhaps the commission of a cleric wishing, in the context, so powerfully captured by Marguerite Yourcenar's L'Œuvre au noir, of the spread of the Reformation and the blossoming of Anabaptism in the Rhineland basin, to " rejuvenate " himself...