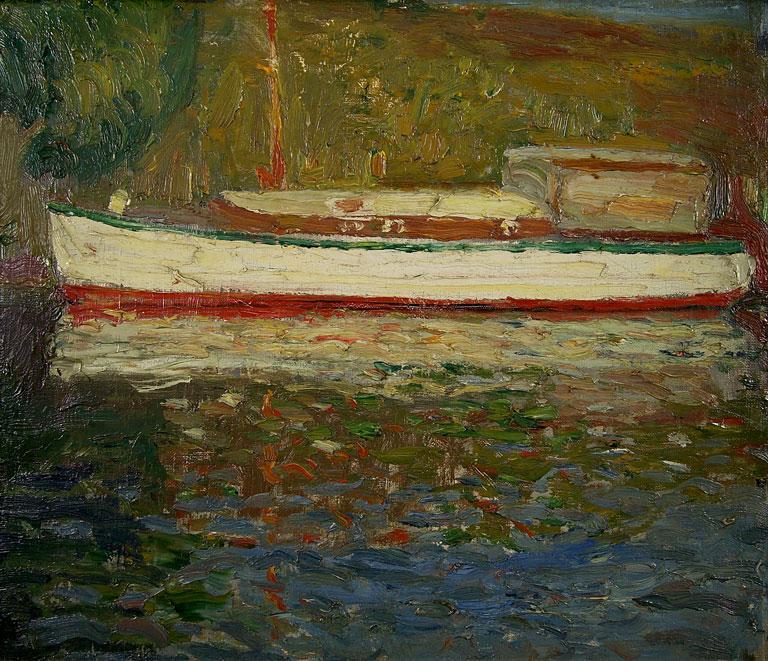 Gustave De Smet is, with Constant Permeke, one of the main protagonists of the "second school of Sint-Martens-Latem". This village on the banks of the Lys, a few kilometers from Ghent, gathered from 1905 to 1914 a group of neo-impressionist painters or, as they are called in France, Fauves, who would evolve after the war towards expressionism.

At the same time, on the banks of the Elbe, near Dresden, the painters of the "Die Brücke" group worked on the same subject, under the title Barge(s) on the Elbe : Erich Heckel in 1904 (private collection), Ernst Ludwig Kirchner in 1910 (Bloomington, University Art Museum). The same thing, on the banks of the Seine, for André Derain who painted Les Deux péniches (The Two Barges) in 1906 (Paris, Musée National d'Art Moderne).

While the Impressionists wanted, in their own way, to be faithful to nature, the Fauves or the Die Brücke group focused on their own emotions in front of this same nature which they expressed through color and an insistent and nervous touch. In this work, it seems to dance with the water, to flatten itself on the hull and the bank, to dilute itself in the sky. In a certain way, it identifies itself with its subject.

The contemporary painter Peter Doig will confront the same subject with White Canoe (1990-1991). Quite a success as the work broke a record at public auction at 5.7 million pounds... More modest in its pretentions, our painting remains nevertheless quite moving.