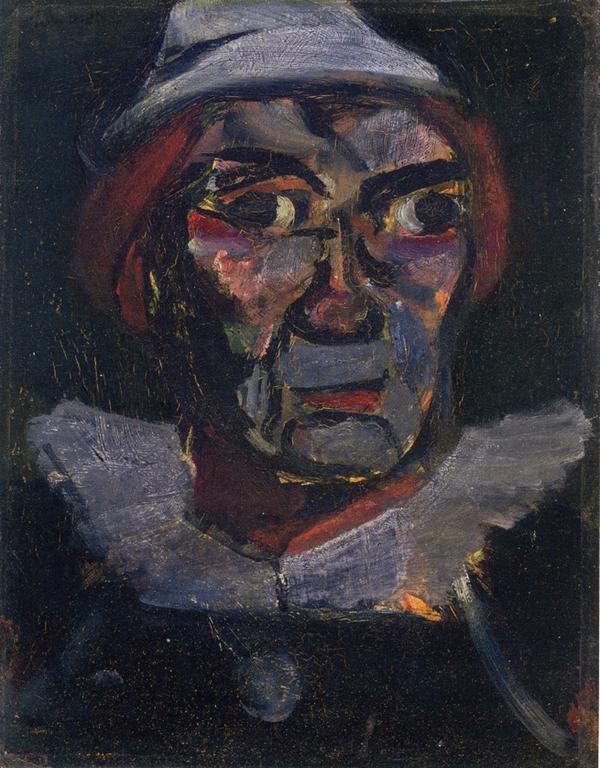 Figure of a clown

Summer Exhibition of Paintings and Sculptures of the 19th and 20th Centuries (Londres, O'Hana gallery, 1963).

Georges Rouault, who belonged to the same generation as Matisse and who, like him, attended Gustave Moreau's studio, followed his very personal path of an expressionism strongly tinged with spirituality which made him famous throughout the world, particularly in Great Britain, in the United States and in Japan.

Few painters have inspired critics like Rouault in his time. Perhaps the Shakespearean accent of Thomas MacGreevy in his review of a Rouault exhibition at the Zwemmer Gallery in London should be used to describe his painting : "flaming darkly with the suffering of the world and the fiery glow of spiritual passion". Rouault himself wrote in 1905 to the critic Édouard Schuré : "This contrast of brilliant, glittering things, made to amuse, and this life of infinite sadness if one sees it from a little high up... Then I amplified all this. I saw clearly that the "clown" was me, he was us [...] " Indeed, this "clown" sounds like a self-portrait.

We are here a few years later, probably in 1909. Rouault abandoned watercolor, enhanced with pastel or gouache, for oil on cardboard or on paper. He had married Marthe, the sister of the painter Henri Le Sidaner, the previous year. The following year, he made his first solo exhibition at the Druet Gallery. Handmade, remembering the art of stained glass that he first practiced, unclassifiable or maybe in an obscure movement including the last Rembrandt, the first Cézanne or Fautrier, Rouault, let's dare to use this word, "challenges" us.

It is curious to think that this painting haunted for forty years a sumptuous Palm Beach villa, a "gothic soul" (said the painter and critic André Lhôte) lost in the ethereal world captured in images by the photographer Slim Aarons.
He was not in bad company.  The same collection included Giacometti's Portrait d’Annette (Annette's Portrait), which sold for $11 million in 2007. Its owner, Frieda Kittay (1910-2007), a Francophile and cultured woman, was the widow of a living symbol of last century's America : a poor immigrant turned multimillionaire and philanthropist...