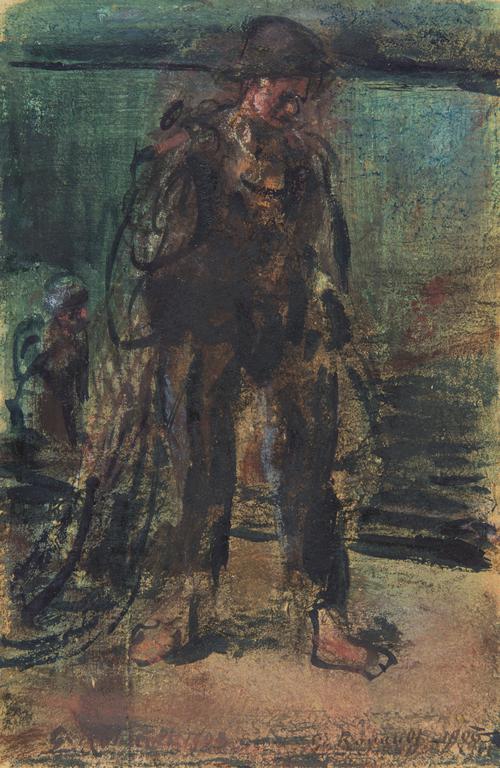 The date written by the painter next to his signature is " 1906 " and not " 1900 " as mentioned until now. This date is corroborated by the technique and the style, close to the Jeu de Massacre (The Massacre or La Noce à Nini patte-en-l'air) of the Centre Pompidou, Musée National d'Art Moderne.

It was from 1902, and especially from the Salon d'Automne of 1904, that Rouault found his way of a harsh, disrupted, uncompromising painting ; comparable, in some ways, to Picasso's blue period, for example, the Noces de Pierrette (Pierrette's wedding) which, like the Jeu de Massacre, was painted in 1905.

The subject of the fisherman is original in these years when Rouault was mainly concerned with clowns, circus girls and prostitutes (the judges would come in 1907). Its Christian connotations – a third of the apostles came from this industry, and Jesus told them "I will make you fishers of men" – undoubtedly inspired the painter. To such a point that, consciously or not, he gave to his character the attitude of Christ carrying his cross on the way to Calvary ; as also Puvis de Chavannes, to his Pauvre Pêcheur (Poor Fisherman) (Musée d'Orsay, 1881), the attitude of Christ in bonds suffering, or about to suffer, the outrages of his executioners.

The work was bought from the Druet gallery, the first to exhibit Rouault, by Krikor Zambaccian. Heir to one of the most important trading companies in Romania (especially in cereals), he built up the most important collection of modern art in the country between the wars and in 1946 he gave to the nation the museum that bears his name, the most pleasant in Bucharest.