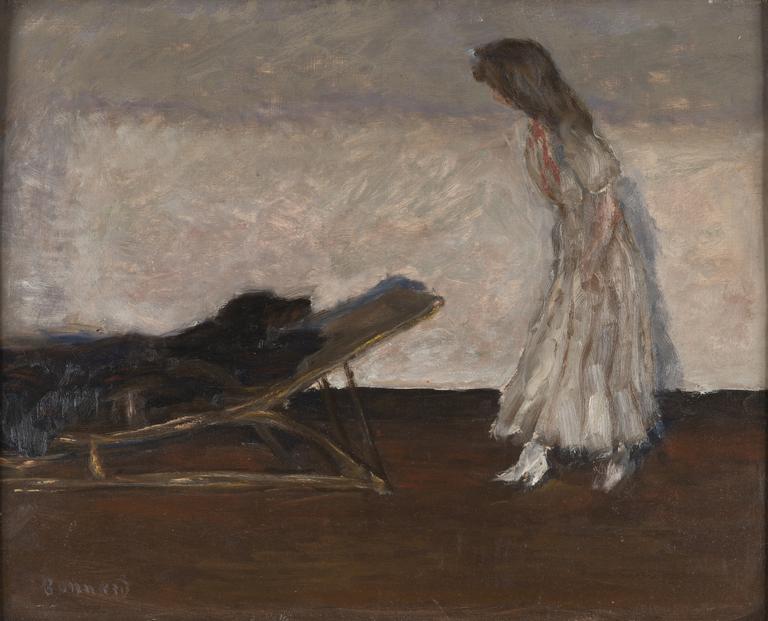 1905 was a turning point, and Paris was more than ever the capital of the arts. At the Salon d'Automne, Fauvism was born, but Bonnard (who had his first solo exhibition the following year at the Bernheim-Jeune Gallery) followed his own path, which was different. In his review of La Gazette des Arts, André Gide remarked : "More spirit, more mischief even, than reason, makes each [of his paintings] something strangely new and exciting (...). Whether he paints an omnibus, a dog, a cat, a stool, the touch is playful."

This is what we feel here in front of a dog, a chaise-longue, and a young woman, almost a child, where we hesitate to recognize Marthe, his companion (perhaps Renee, his niece). The dog Black, the spaniel of the household, is more recognizable, and almost more alive. As Thadée Natanson (Peints à leur tour, Paris, 1948) so nicely wrote, Bonnard "was not a misanthrope but preferred animals".

The touch, admirably preserved on this never-restored painting, vibrates with the same passion as Rothko's later, and Goya's earlier, whom Bonnard studied in 1901 and again in 1905, during two trips to Madrid. The playfulness emerges from the very simplicity of the composition, from the two convex forms of the young woman and the chaise-longue, on a background of rectangles, the floor, the wall, cut by the light.

Paris at the Belle Epoque is also the capital of the theater. Painters, especially the Nabis, were commissioned to decorate theatres, create sets and publish posters. As the scene seems to take place on a stage that the silent dialogue between the young woman and the dog occurs, in an intimacy – the characteristic of the Nabis, and particularly of Bonnard and Vuillard – the scene paradoxically appears as, in a way, a "boulevard painting".

Sam Salz sold this painting in 1965 to a collector. His family kept it for over half a century. Born in Vienna, where he had studied fine art, he moved to Paris after the First World War, working with Vollard and Bernheim-Jeune, then to New York in 1938. He became one of America's leading dealers and collectors (he exhibited in his Upper East Side townhouse), counting Henry Ford II, Paul Mellon and David Rockefeller among his clients.