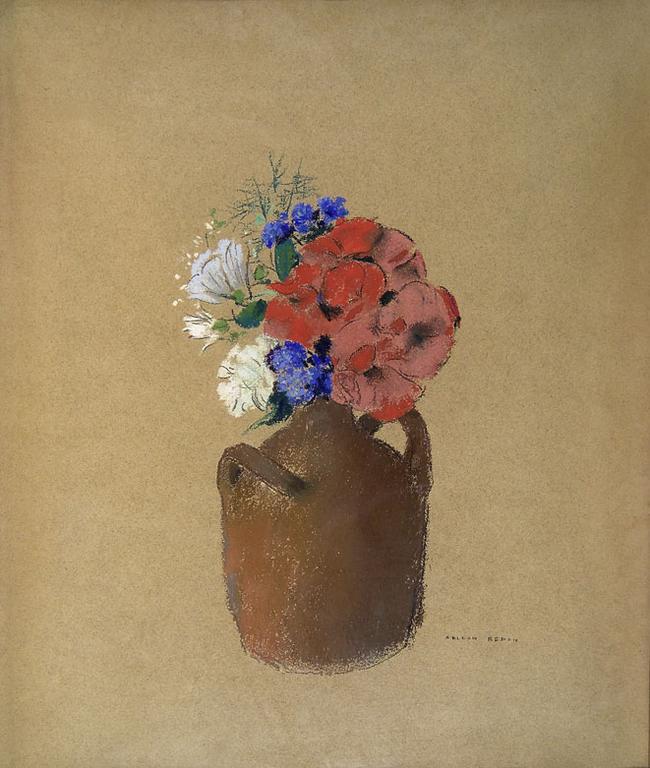 For a long time, Odilon Redon expressed himself through lithography and charcoal (his famous "Noirs"). After 1890, color became more important in his work, and from 1900 he painted a series of bouquets, exhibited in 1903 and 1906 at the Durand-Ruel Gallery, commented by the painter Maurice Denis  : "For several years now, he has been transforming himself, evolving. He has abandoned without remorse and pushed by a mysterious force, the sumptuous harmonies of black and white where he excelled to devote himself, from now on, to the pleasure of fixing the splendor of shimmering flowers, the joyful sensuality of the colors." ("Œuvres récentes d'Odilon Redon", L'Occident, April 1903).

From Manet, as an exercise in pure painting, to Hockney, experimenting with the artistic possibilities of the iPhone, many painters have used this simple motif of flowers in a vase. Redon added an extra soul that was well summarized, at the same time, by the "Sâr" Péladan, better art critic than mage : "The one who believes that the goal of art is to reproduce nature will not paint anything lasting, because nature lives. But it does not have understanding. In the work, thought must compensate and replace life." (La dernière leçon de Léonard de Vinci, Paris, 1904).

This pastel illustrates Redon's extraordinary ability to render what the critic Bernard Berenson called "tactile values" through contrasts in form and color. Inspired by the Japanese prints and screens in vogue at the end of the 19th century, he combines the exuberance and velvetiness of the flowers with the austerity and dullness of the vase on a neutral, plain background. Playing with a cameo of red tones, he obtained what he called "the tremor of the colored surface by the tone on tone" ("À soi-même", Journal, Paris, 1922).

This modest sandstone vase, these atypical cut flowers – in high society people hardly make a bouquet of field flowers – speak in their own way of the greatness of the humble and the humility of the artist. Redon, born one year after Cézanne, is here halfway between the intense, rigorous still lifes of this immense painter and the concentrated, luminous work of Giorgio Morandi.