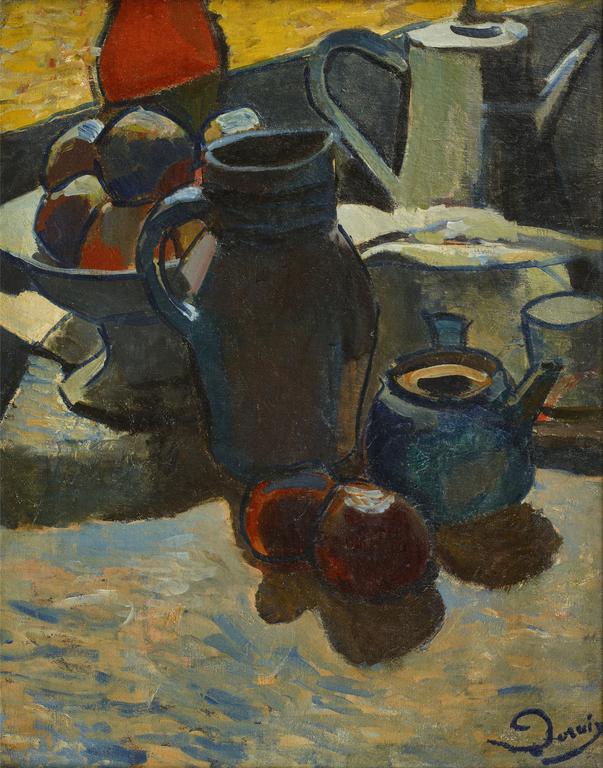 The catalog of the recent exhibition Derain 1904-1914 at the Centre Pompidou opened with a quote from Gertrude Stein, who saw Derain as "the Christopher Columbus of modern art", the discoverer of a pre-Cubist continent that Braque and Picasso would have begun to conquer. In fact, and it is John Golding who summarized it in Le Cubisme, Derain played the role of a link between Cézanne first and then "primitive" and modern art.

The same catalog underlined the "sometimes inaccurate" dating of the catalog raisonné which dates the Still Life with Blue Pitcher "around 1901", whereas it has been exhibited twice as dating from 1904-1905 and once from 1907. We propose to keep the 1904-1905 date, based on the style.

In September 1904, Derain, aged of 24, returned from military service and dedicated himself to painting. At the Salon d'Automne, in October-November, 31 paintings by Cézanne were exhibited, most of which belonged to Ambroise Vollard, the art dealer and collector who was the first owner of our painting. Roger Marx, an eminent critic and the first apostle of the moderns, wrote in La Gazette des Beaux-Arts that Cézanne "gives to fruits, flowers, and everyday objects a reality, an extra-ordinary relief ; here the gifts of the colorist reach such an intensity of expression that painting seems never to have better expressed the animating power of human genius".

This lesson was superbly echoed by Derain, with in addition this audacity that the following year at the same Salon d'Automne, would be called "Fauve" : the exuberance of the color, the virulence of the line.