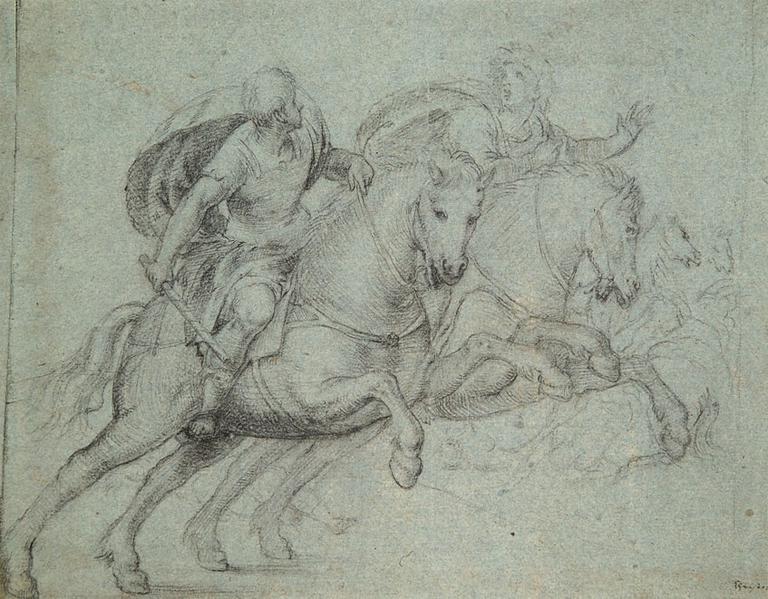 Pordenone was in the Venetian sphere, for a generation, the unfortunate rival of Titian. His work was unlucky. He painted a lot in fresco, in country churches or facades of palaces. The first ones were often damaged or disfigured by restorations, the second ones erased by time. This explains the importance of his drawings which can be found in the most important museums. In the Louvre, there is a drawing of a similar size and technique, in black pencil on the blue paper common in Venice in the 16th century : a Naked Man Holding a Book, preparatory to the façade of the Palazzo Tinghi, in Udine, around 1532.

Our drawing, inspired by antiquity, probably from a sarcophagus depicting the rape of Proserpina can be seen as a cavalcade appropriate for decorating the facade or interior of a palace, a study sketched on paper to convince a patron or to fix an idea. First attributed to Pomponio Amalteo, Pordenone's son-in-law and pupil, why return it to the master? Let's consider the criteria of quality that the art historian Jakob Rosenberg assigned to the ancient drawing : the line "vibrates" ; the forms and planes are clearly defined ; the space unfolds ; the composition is coherent and dynamic. In contrast, Amalteo's drawings are generally applied. His drawings lack, in the words of Charles E. Cohen, "the organic suppleness and rhythmic quality in the rendering of protuberant forms" that characterize Pordenone's drawings, and this one in particular.

This "ardor" (a term often used in reference to Pordenone), which is nonetheless very controlled, closer to the classical Renaissance than to Mannerism, to Raphael than to Tintoretto (who retained many of Pordenone's formal inventions), leads us to date this drawing after his trip to Rome in 1516. Pordenone may have been thinking, for the horse and the rider in the foreground, of the Expulsion of Heliodorus, Raphael's fresco in the Vatican chambers, the "last but not least" of an art form still contemporary, since it's to date from 1512, and from an artist born in the same year.

It is with this fresco that he confronts himself in his major work, Jesus led to Calvary in the cathedral of Cremona (1520), whose horse and rider on the right are the closest to our drawing. Later, a rider with a floating cloak, a horse firmly planted in the corner of the composition, can be found in Saint Martin and Saint Christopher in the church of San Rocco, Venice (1528-1529). But the spirit is no longer the same, less unbound, more contorted. Therefore we date our drawing from the beginning, or the middle, of the third decade of the century.