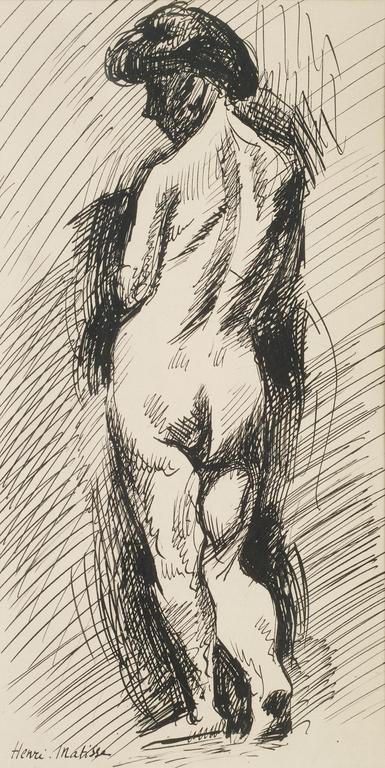 Matisse was also a sculptor, continuously from 1900 to 1914, intermittently after, and this drawing is typical of a sculptor's drawing. Form emerges from the repeated cross-hatching of shadows on the paper.

In that period, Matisse's sculpture was inseparable from his painting and placed under the double influence of Cézanne and Rodin. At the end of 1899, he bought from Vollard the Trois baigneuses (Three Bathers)  by Cézanne (Paris, Petit Palais) and a plaster Buste d’Henri Rochefort (Bust of Henri Rochefort) by Rodin.

The model, of those who worked at the ephemeral Rodin Institute that Matisse frequented in 1900 and in the Montparnasse studios, is represented in a contrapposto. Iconographically, she is similar to Madeleine II, a bronze of 1903 (which followed a Madeleine I of 1901). It is an identical reproduction, seen from behind rather than from front, of the Académie bleue (Nude Study in Blue) of 1899-1900 (London, Tate Gallery). A more subterranean influence is visible. The incisive line obviously refers to engraving, which Matisse tried for the first time in 1900-1903, in a self-portrait in which he took the attitude of Rembrandt in an engraved self-portrait of 1648. Rembrandt had also represented himself drawing a model, from behind, with her head towards the left, in an engraving of 1639.

Aesthetically, the success of the drawing is due to the vitality of the line, which is the vitality of the artist himself, eager, in a hurry, to model the figure, to imprint on it the rotational movement which is simultaneously the one of the turntable where models sometimes posed, the cylindrical relief of The Dance, of 1907 (Nice, Matisse Museum), and finally the famous Danse of 1909 (Saint Petersburg, Hermitage). In short, to infuse life into it : the myth of Pygmalion.

It is not a coincidence that this drawing, like the first version of La Danse (New York, MoMA), was in the collection of the industrialist and great American collector Walter Chrysler Jr. It had also belonged to Curt Glaser, a German art historian, defender of Munch and the Expressionists, especially Beckmann, and a personal friend of Matisse.