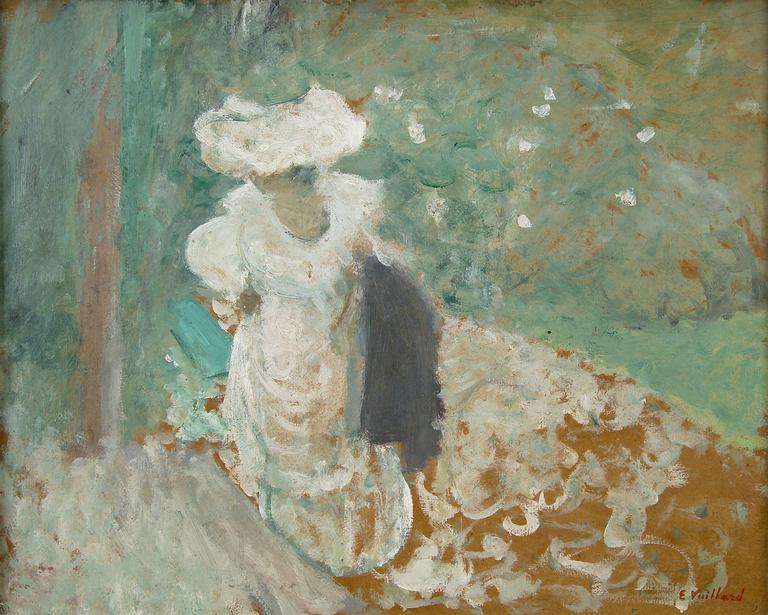 From 1900, Édouard Vuillard, who would not marry, formed a quasi "ménage à trois" with the art dealer Jos Hessel and his wife Lucy. She became the artist's muse and probably his mistress.

Vuillard stayed regularly with the Hessel couple and the brilliant society that followed them at their property in Vasouy near Honfleur. Gradually leaving behind the "muffled" painting of the 1890s, he painted in 1901 (and reworked in 1935) one of his first large, vivid and contrasting exteriors, La Terrasse à Vasouy, le Déjeuner (The Terrace at Vasouy, Lunch - London, National Gallery).

Far from these ambitious, but in a sense less audacious, compositions, our painting is about a new simple happiness like a country party, an intimacy that is no longer confined. Lucy seems to drag the whole landscape with her dress, leading the way for the painter. As often in paintings (or photographs) of her, she is dressed in white, and we can think that she was, for Vuillard, the "White Lady" with the two faces, protective or threatening, of the legends...

But this painting also announces what is most original in the art of the second half of the 20th century : the released character of the touch, the snowy whites, the gray spot "in your face" are not far from some of Cy Twombly's works...