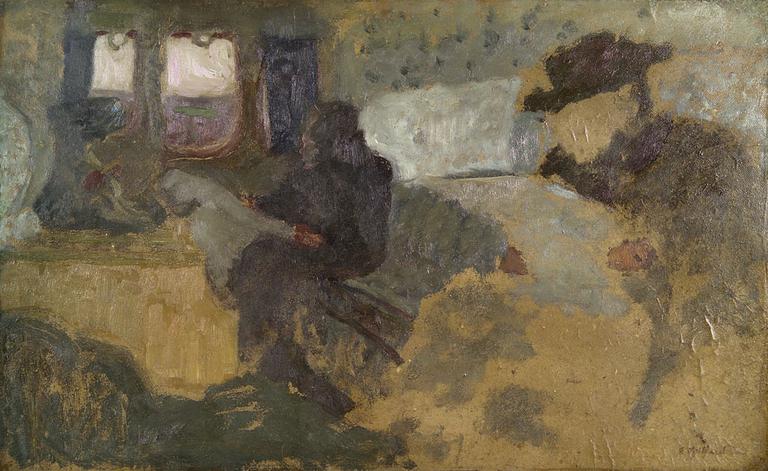 In 1890, Édouard Vuillard joined the Nabis group, through Maurice Denis, who noted that Bonnard and Vuillard, in opposition to himself and Sérusier, liked "small, dark paintings, made from memory, without models, with small importance given to figures, and consequently to drawing". He added "complicated matter" (Journal, March 1899). Indeed, Vuillard painted throughout the decade these confined spaces where, one might say, the figures "make a mess"...

This painting, preserved in the painter's studio, is undoubtedly one of the most free, almost non-figurative. It surprises by its fulgurance : a railway snapshot, three characters in search of meaning managing to "draw the eternal from the transitory", as Baudelaire asked to modernity. It has probably been rarely understood. His most famous owner, Erwin Swann, gave his collection of caricatures to the Library of Congress in 1974. Vuillard specifically refers to Daumier when he mentions the painting in his Journal, Daumier who first, in 1864, dared to paint... a Wagon de troisième classe (The Third-Class Carriage - New York, Metropolitan Museum).

As in Munch's Scream in 1893 (Oslo, Nasjonalmuseet), solitude is the subject. But without tragedy – Vuillard reads a lot and frequents Mallarmé, who in his Poèmes en prose says "I have always cherished solitude"... "The Reading" could just as well be the subtitle of this painting in which each of the characters is plunged into a book or a newspaper. In the same way, the spectator plunges his gaze inside this compartment, trying to distinguish the forms, immersed in a sumptuous accord of rare colors, and finally arriving at the window, where a few touches of clear paint reveal the joy of painting, and the hope that Vuillard has never ceased to maintain.

Delicacy is rare in modern art : combining delicacy and freedom is never easy. Vuillard did it... But as Mallarmé rightly said : "Vuillard can do anything."