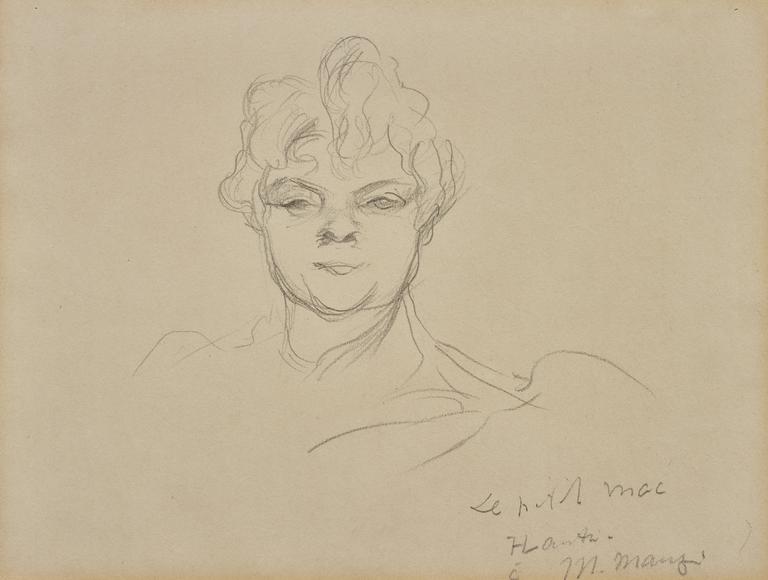 Toulouse-Lautrec, as well as Degas in the previous generation but in a shorter time, because he died at 36, swept away artistic and social conventions. Both are painters of expression, of gesture, less interested in the landscape than in the figure, the movement, and for that reason, extraordinary draughtsmen.

Nothing illustrates this more clearly, more obviously, than this sketch of Rolande, known as "Le Petit Mac", a resident of the brothel in the rue des Moulins, in the 1st arrondissement, where Toulouse-Lautrec, from 1891 to 1895, had his habits and even, in 1894, lived temporarily. Paris, at that time, after the Universal Exhibition of 1889, was the capital of theater, music hall and prostitution (about 60,000 practitioners). He himself, crowned by the success of his posters, had reached the maturity of his art, but his handicap kept him on the margins of social life, finding there a form of affection and inspiration. Today, Le Salon de la rue des Moulins (The Salon of the Rue des Moulins) is the flagship work of the Toulouse-Lautrec Museum in Albi (Rolande and her trumpet nose can be seen on the left, in the background).

The figure is extraordinarily lively. It's about to engaging the dialogue with the same cheeky manner as Simone Signoret in the movie Casque d'or. But the frontal pose, as a Roman bust, gives him an additional dignity.

Toulouse-Lautrec gave and dedicated this drawing to Michel Manzi. Manzi, a native of Naples like Degas' maternal family, was in 1894 (and remained until 1919) the associate of Maurice Joyant, himself a childhood friend of Toulouse-Lautrec, at Boussod-Valadon, successors of Goupil. It was, with Durand-Ruel, the most important art gallery (but also publisher) of the late 19th century.

Then it belonged to Marcel Guérin, an art critic who published the correspondence of Degas and the engraved work of Gauguin ; then to Sam Salz, one of the greatest American dealers of the 20th century ; and finally to the astonishing couple Elisabeth and Alexander Lewyt. She was a naturalized French-American animal rights activist ; he was the son of an Austrian immigrant and a serial inventor. Their collection included major works by Cézanne, Modigliani, Picasso...