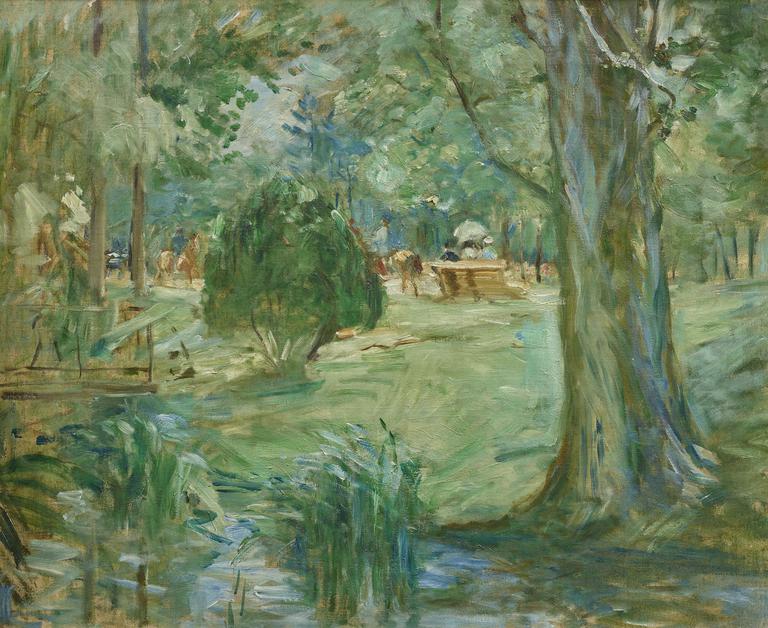 Berthe Morisot, prematurely deceased at the age of 54, contemporary to Renoir and Monet by few months, and who participated in all the exhibitions of the Impressionist group (except in 1879), has not yet the place she deserves in the history of art. Influenced by Corot at first, then close to Manet since she married his brother Eugène, and finally to Renoir, with her vivacious and luminous style, she is their equal, discreet and original.

Her landscapes are rare, and in her landscapes there are few where one or more characters do not have the first place. Hence the interest, as well as the charm, of this painting of a spring morning in the Bois de Boulogne. She lived in rue de Villejust (today rue Paul Valéry, who, later, married her niece), a building constructed by her in-law family in this newly urbanized area, close to the Bois arranged "in the English style" under Napoleon III.

Let's see how her exhibitions preface writers talk about her first two personal exhibitions : the first one, in 1892 at Boussod-Valadon, the other one in 1896 (one year after her death) at Durand-Ruel. The first, Gustave Geffroy, who published his Histoire de l'Impressionisme the same year, spoke of "his blue softness and green ash". The second, no less than Mallarmé, a close friend who was the tutor of his daughter Julie, evoked her painting "with fury and nonchalance". These are exactly the colors and the touch of this painting. In the fury, we can hardly distinguish, in the foreground, a goose, a swan, a dragonfly, two women leaving by the left. Moreover, in the nonchalance, the walkers on horseback or sitting on a bench, in the background. By the way, consider how the reddish-brown saddle enlivens, in its center of gravity, the whole painting : an echo of Corot.

Let's us her express herself, in her Carnets : "The desire for glorification after my death seems to me an inordinate ambition. Mine would be limited. I want to capture something of what is passing."

Sarah Jane Pansa, née Sanford, who owned the painting until 1985, was the granddaughter of Stephen Sanford, the American "carpet king". Her golden youth, with her sister Gertrude and brother Stephen, inspired George Cukor's 1938 film Holiday. The next owner, until 2017, was Martin S. Weseley, a leading New York orthopedic surgeon and an avid collector of modern art.