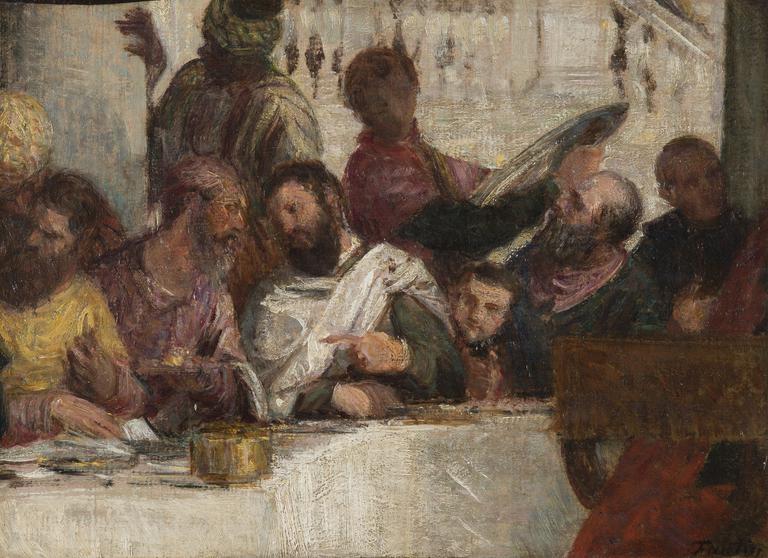 Fantin-Latour, celebrated for a long time for his still lifes or his musical allegories, is today known above all for his group portraits, collected at the Musée d'Orsay : the Hommage à Delacroix (Homage to Delacroix - 1864), the Atelier des Batignolles (A Studio at Les Batignolles - 1870) and the Coin de table (By the Table - 1872). It is fair that he is one of the few "modern" artists included in the immense group portrait that is A la Recherche du temps perdu : "A beautiful painter, a master of the palette", said Monsieur de Norpois.

At his beginnings, and even after his first participation in the Salon (1861), Fantin-Latour made numerous copies in the Louvre. Gradually, these copies became freer, until they resembled sketches and sometimes, consciously or unconsciously, inspired a new work. On the 11th September 1871, he wrote to Otto Scholderer, a German painter, childhood friend and lifelong pen friend : "Sometimes I go to the Louvre to make sketches (...). My affections are always the same, Veronese, Correggio, Giorgione, Titian, etc..." And on the 22nd of December 1871 : "Italian more than ever, I am making great plans for the next Salon, I am not yet decided."

At this moment, he was thinking of a Hommage à Baudelaire (Tribute to Baudelaire), of which a first study exists in the Louvre Museum (n° RF 12492), quite different from the work finally presented at the Salon of 1872, the Coin de table (By the Table). However, this one owes much (the eponymous table corner, the arrangement of the figures) to this sketch after Veronese's Christ at Supper with Simon, a huge painting that was in the Louvre until 1961, then moved to the Palace of Versailles – because, unlike the Wedding at Cana, which was taken by Bonaparte, Christ at Supper with Simon was given to Louis XIV by the Republic of Venice.

This very free, very luminous piece is therefore a kind of "first thought" for Le Coin de Table (By the Table), now exhibited at the Musée d'Orsay, which is certainly darker, more static, and famous for the presence, on the left, of Verlaine and Rimbaud.

There is, still after Veronese, a counterpart, of the same dimensions, representing the right side of the banquet, which was sold in Amsterdam in 1994 (Sotheby's, Amsterdam, 19th April 1994, n°144).