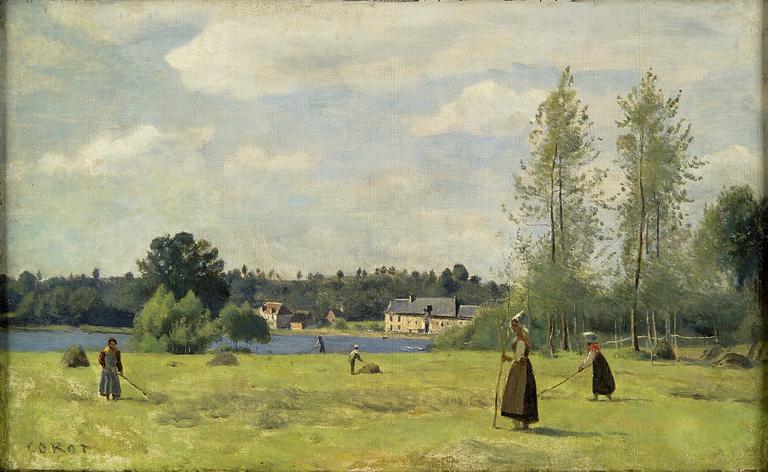 The work of Camille Corot goes from the 1820s, and the neo-classical landscape of his masters Bertin and Michallon, to the 1870s and the blossoming of Impressionism. It is debated whether he was the precursor, or a singular landscape painter, announcing Cézanne and symbolism.

This painting, among a few quite rare others, almost "random" in his work, testifies in any case that if he did not adhere to the impressionist dogma, Corot was able to approach its practice. The first example and his "master stroke" in his work, Port de La Rochelle (The Harbor of La Rochelle - New Haven, Yale University Art Gallery), in 1851, which made Renoir say Corot was "the greatest landscape painter who ever lived" (René Gimpel, Journal d'un collectionneur, 20th March 1918). We find the same sky with light and nonchalant clouds. Corot later worked with the Impressionists at their very beginning, especially Pissarro, and painted in the same vein, in 1860, the Chemin de Sèvres (The Road to Sèvres, Musée du Louvre, stolen in 1998).

It is difficult to date, and sometimes to locate, Corot's landscapes but our painting can be dated to those years, between 1860 and 1870, comparing it to a comment made by Daubigny to the painter Frédéric Henriet in 1860 : "Corot found Auvers very pleasant, and encouraged me to stay there for part of the year, as he wanted to paint rustic landscapes with figures." (Frédéric Henriet, Daubigny et son oeuvre gravé, 1875).

Concerning the location, Nathalie Michel's research on Corot and the topography of Ville d'Avray does not allow us to determine it with confidence. The houses in the Hameau des Blanchisseurs, north of the Étang-Neuf, were more numerous and higher. It is possible that they are hidden by the clump of trees on the left – Corot uses quite often that technique, to simplify the composition. Or it may be another pond, the Étang-Vieux in Ville d'Avray, Daubigny's pond in Auvers, another in Normandy which the headdress of the haymakers refers to... Topographical accuracy is not Corot's purpose, as he said to the same Henriet : "The trees ? When I make them, they are cut for me ! I put them where I want." (Frédéric Henriet, Les Campagnes d'un paysagiste, Paris, 1891).

Contrary to the landscapes of Italy, or the last "Souvenirs", the light, here, does not dazzle or dissolve : it vibrates, in a truly impressionistic manner, in the doubled tones of green and blue, revived by the vermilion accents. Some ten years later, Monet's Train dans la campagne (Train in the Countryside - Musée d'Orsay) will play with the same tones of horizontal bands of sky and vegetation, punctuated by the verticality of trees and a few figures.

Jérôme Ottoz, an important dealer in canvases, frames and colors who was portrayed by Degas in 1875-1876, was the first owner of this painting, which remained in his descendants until 2011.