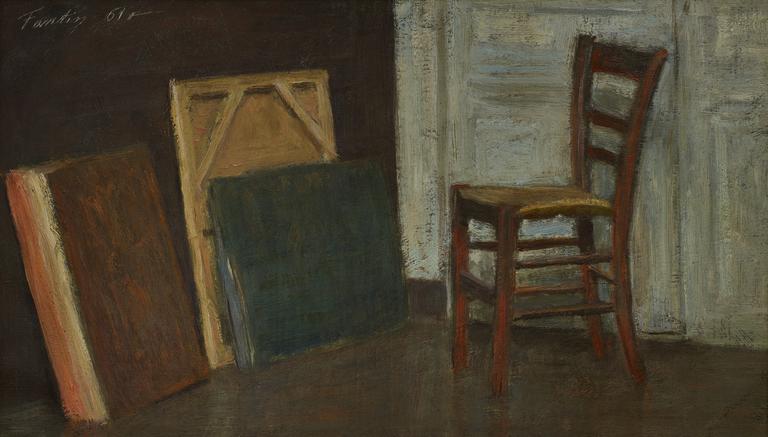 The introduction to the catalogue of the Fantin-Latour exhibition at the Musée du Luxembourg, in 2016-2017, noted "the very particular light that brings unity to Fantin-Latour's career, this harmony of subtly muted colors", and the comparison with the Danish painter Vilhelm Hammershøi : "playing with the motifs offered by interiors such as room corners, molded doors or paneling, which, as in Fantin's works with the paintings in the background, are many geometrical forms structuring the composition and participating in a muted and silent atmosphere." We also think of Giorgio Morandi. What are these objects doing here? They constitute the painting, and that is enough. Fantin-Latour's modernity is all the more astonishing, even natural, considering that he was just beginning. He was 25 years old and shared his father's studio at 31 rue de Beaune. Hammershøi was not born yet...

Fantin-Latour's still lifes reflect his Flaubertian conviction that "art requires all sacrifices, art is outside of life", as he wrote in October 1861 to the English engraver Edwin Edwards (Adolphe Jullien, Fantin-Latour, Paris, 1909). The sacrifice here is the painter's, whose chair remains empty – a symbolism also present in the Buddhist tradition, in Van Gogh (again, a generation later...) and of course in politics – and whose canvas only shows the reverse. As Flaubert wrote (to Alfred Le Poittevin, September 1845) "if you want that a thing becomes interesting, you just have to look at it for a long time", Fantin-Latour used to say that "the most banal things in appearance have an interesting character" (Zacharie Astruc, Les Dieux en voyage, Paris, 1889).

This painting has never been reworked and has a rich provenance. Paul-Arthur Chéramy, a Parisian solicitor, was one of the great collectors of the late 19th century. Eva de Basily-Callimaki, daughter of a Romanian diplomat, wife of a Russian diplomat, had been a friend of the painter, who portrayed her in 1879 and 1881, as well as of Rodin and the composer Ernest Chausson. Lana Marconi was the actress (Marie-Antoinette in Si Versailles m'était conté), the third wife and finally the widow of Sacha Guitry.