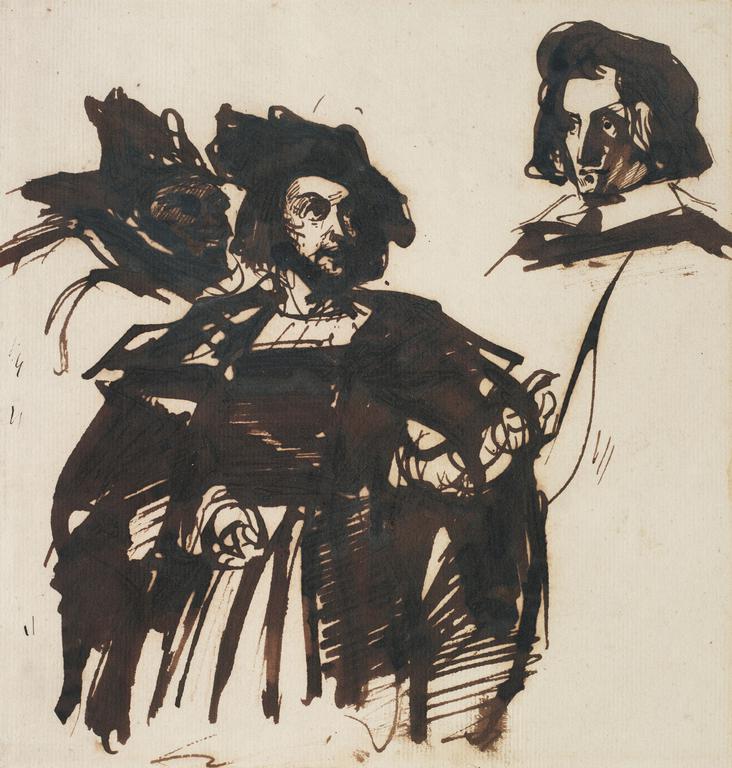 Study for Faust and Mephistopheles. Self-portrait of Delacroix (?)

This drawing combines three geniuses of Romanticism : Goethe, author of the first Faust, illustrated by Delacroix, still young but already famous (and controversial) after the Scènes des massacres de Scio (The Massacre at Chios - 1824) and La Mort de Sardanapale (The Death of Sardanapalus - 1827). And even if it is not certain that it was a gift from Delacroix to Hugo, nor that it portrays Hugo (at the top right), it belonged to one of his followers, Auguste Vacquerie, and followed him in his exile in Jersey and Guernsey.

Delacroix met Hugo in 1826, and designed the costumes for Amy Robsart, a play published under the name of Hugo's brother-in-law, Paul Foucher, in 1828. But the painter and the writer did not appreciate each other very much, even if Victor Hugo, in a letter to Victor Pavie (17th July 1828) speaks of "the Faust of the two great poets, Goethe and Delacroix". It was Paul Foucher who acted as intermediary when, in 1851, Auguste Vacquerie purchased three paintings by Delacroix (Le Lever, Le Bon Samaritain and Le Giaour). André Joubin reproduced this drawing, in the frontispiece of Eugène Delacroix's Correspondance générale, as "gifted by him to Victor Hugo in 1828", "with a portrait of Victor Hugo on top". But the fact that Auguste Vacquerie photographed it in Jersey, in 1855, and reproduced it in his book Profils et grimaces does not mean that it belonged to (and represented) Victor Hugo or depicted Eugène Delacroix himself, as it has been suggested later.

Delacroix was commissioned by the publisher Charles Motte in 1826 to produce a series of lithographs for Faust, in Albert Stapfer's translation, which was published in 1828 (the same year as Gérard de Nerval's reference work). In the meantime, in 1827, the first performance of the play, adapted by Emmanuel Théaulon, had been given at the Théâtre des Nouveautés.

Therefore the drawing would be either preparatory to the lithograph – but the iconography does not correspond – or following the performances given at the Théâtre des Nouveautés. In fact, the attitude of Faust, proudly standing, and Mephisto's one, whispering in his ear, are eminently theatrical, and the profile at the top right looks more like Bouffé, who played Mephisto, than Hugo or Delacroix. The latter would have sketched him in his everyday life, as the incarnation of romantic youth, as well as on stage, all in diabolical darkness.

In his Conversations with Eckermann (29th November 1826) Goethe wrote about two lithographs already made by Delacroix that he had received from Paris : "I must confess – he comments – that, in these scenes, M. Delacroix has surpassed my own vision."