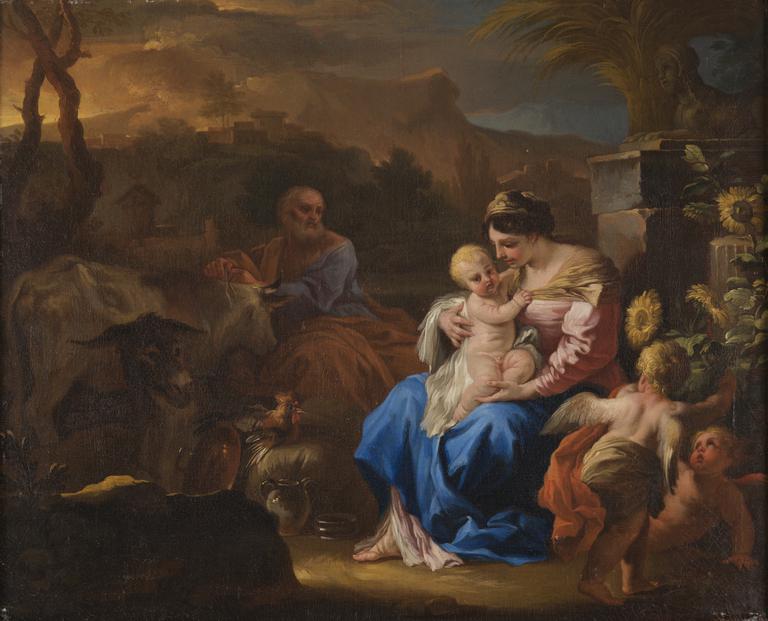 The Rest During the Flight to Egypt

Solimena is, after Giordano, the main Baroque painter in Naples. But in that painting, in his early years, he is still under the influence of Roman classicism, tinged with anxiety (in the vesperal landscape) and fantasy (in the charming detail of the sunflower that reproduces as if in counterpart the hair of the cherub) proper to the Baroque.

The apocryphal gospel of Pseudo-Matthew relates that on the way to Egypt, to escape the massacre of the children of Judea ordered by Herod, the Holy Family stopped under a palm tree (here in the background) which, on the injunction of the divine Child, bends its branches to offer its fruits, and makes a spring gush out from its roots. The scene is enhanced by the presence not only of the donkey, but also of an ox, which it is hard to believe that it followed the flight from Bethlehem, of a rooster which perhaps announces the episode of the betrayal of Saint Peter, the moment when Christ, far from fleeing, will instead face his destiny, and finally of a sphinx, a metonym for Egypt.

There is one large version of this composition (97 x 139 cm, location unknown) and two smaller ones : one, on copper, bequeathed by the great art historian Denis Mahon to the Fitzwilliam Museum in Cambridge ; and our version, on canvas, from the collection of Everett Fahy, who was chief curator of European paintings at the Metropolitan Museum and director of the Frick Collection. In the catalogue of the Denis Mahon collection, Gabriele Finaldi, the current director of the National Gallery in London, considered the two works "of similar quality" and recalled the existence of an engraving of 1724, during the artist's lifetime, based on our painting (the major difference with the copperplate version is the absence of a tray of fruit in the hands of the blond cherub).

If this composition seduced two great specialists of Italian painting, it is, perhaps, because it perfectly illustrates not only the confluence of classicism and baroque, but also the magical moment, at the end of the 17th century (Nicola Spinosa, the specialist of the artist, dates it to around 1680), when blossomed the feeling of intimacy and nature, which would become so important in the following century.