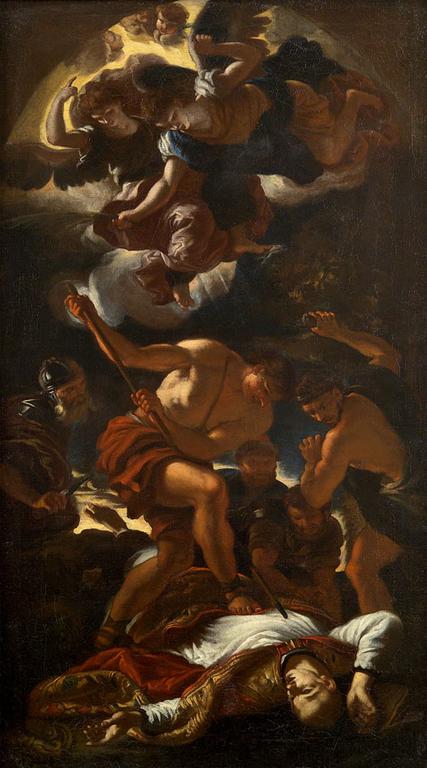 The Martyrdom of Saint Gerard Sagredo

Gerardo (Gherardo) Sagredo was a member of one of the oldest families in Venice. He became bishop of Csanad, in eastern Hungary. In 1046, during a period of civil and religious troubles, he was assassinated at the entrance of the capital Buda. The hill, today, bears his name (Gellert in Hungarian).

In the 17th century, the Sagredo family assumed the highest offices in the Serenissima : Niccolo Sagredo, doge in 1675 and died the following year, and Alvise Sagredo, patriarch of Venice from 1678 to 1688. At the same time two chapels were decorated in honor of Saint Gerard, one in Venice in San Francesco della Vigna, the other in Padua in the Basilica of Santa Giustina. In 1678, in that Basilica, a gigantic canvas (almost 4 meters high) by Johann Karl Loth, also known as Carlotto, a painter of German origin, settled in Venice in 1656, was erected.

Three other smaller versions are known. One, in the Strasbourg museum (176 x 99 cm), in an unusually light tone, once attributed to Peter of Cortona. The other, located in a private collection in Paris in 1990 (93,5 x 55,5 cm), is unknown to us. Finally, our painting, reappeared in 2009. Its composition corresponds to the painting of Strasbourg where the five murderers mentioned by the ancient chronicles appear, whereas there are only three of them in Santa Giustina ; but the background is darker, even tarry, the contrast of colors more distinct, the touch more free.

We can suggest, therefore, that work is a bozzetto – the overall design, less elaborate than a modello – of the final work, where the commissioners would have asked the painter to eliminate the soldier with a dagger and the man bending over with a grimace, without interfering with the murder, because the same chronicles simply tell us that the saint was stoned to death and executed with a spear. Then, the Strasbourg painting would be either an intermediate modello, or more likely a reworking – perhaps for the Sagredo family – of the original design, in a format and color scheme more suited to the salons of a Venetian palace.

Our painting is both a remarkable "synthesis" of the Baroque – the representation of violence, the spiral composition, the chiaroscuro – and an illustration of what another Venetian painter, Sebastiano Ricci, wrote in 1735, about one of his bozzetti : "The small is the original, the large is only the copy. "