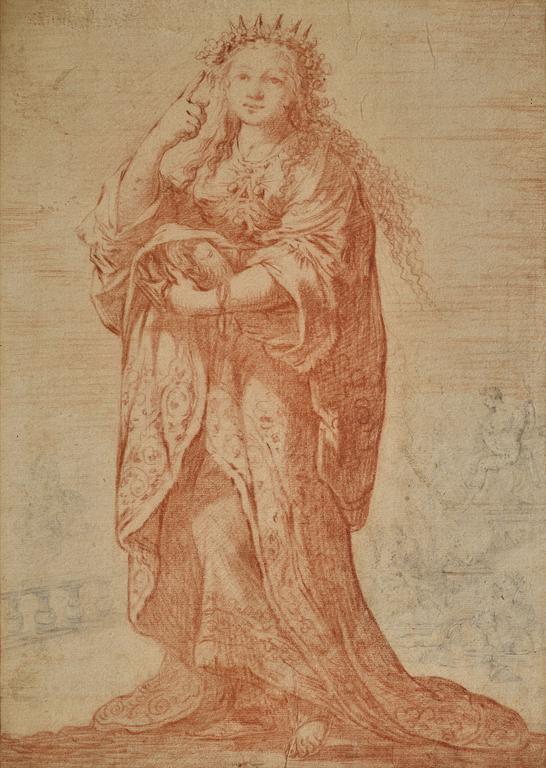 Along with Simon Vouet, Claude Vignon was the most representative painter of what we called the Louis XIII period, a temperate Baroque, open to influences (especially Italian) but with a strong personality. His rich and colorful style seduced both the Church (particularly the Jesuits) and the Court.

Prolific father and painter – his sons worked with him in his studio – his artistic qualities are much more preserved in his drawings, often intended for engraving, than in his commissioned works.

Paola Pacht-Bassani accurately wrote about this drawings that it is "a very fine example of Vignon's graphic art in its full maturity". It was also the first drawing by Vignon reproduced (in La Gazette des Beaux-Arts in 1946). It is part of a preparatory series for the 20 engravings of La Galerie des Femmes Fortes, a work by the Jesuit Father Pierre Le Moyne published in 1647 with the patronage of the regent Anne of Austria.

Le Moyne's work and its illustrations were so successful that they were reproduced in painted or enamelled decorations, in all kinds of places and objects, in the second half of the 17th century.

The theme of Femmes illustres (Illustrious Women), or Femmes fortes (Strong Women – morally speaking, even if Vignon tends to translate it also by their physical characteristics), already present in Plutarch, and echoed by Boccaccio at the end of the 14th century, had a significant revival in France in the first half of the 17th century. The two regencies of Marie de Médicis and Anne of Austria (and the Fronde, in which women played a leading role), the female contribution to intellectual life and also, without distinction of gender, the "heroic" theme illustrated by Corneille, contributed to this.

Our drawing representing Camma, queen of Galatia (in central Anatolia, around present-day Ankara), is drawn in red chalk, with a strong, confident line. She carries, under a fold of her cloak, the cup of her poisoning and designates the sky from which her murdered husband looks at and wait for her. By pretending to accept to marry his murderer, she presented him, in the temple of Diana, the nuptial cup and drank, with him, the poison she had put in it... The scene is suggested, drawn in black chalk in the background, under a statue of Diana. On the left, Camma is fainting. On the right, her husband's murderer is convulsing.

7 drawings corresponding to engravings of this series are known, all of them belonged to museums : including, until recently, this one, given in the 19th century to the Rugby School Museum by a nephew of the painter and collector Thomas Lawrence. The second to last one to be sold (Sotheby's, Paris 25 March 2009, n°41) is now in the Metropolitan Museum, the last one is here...