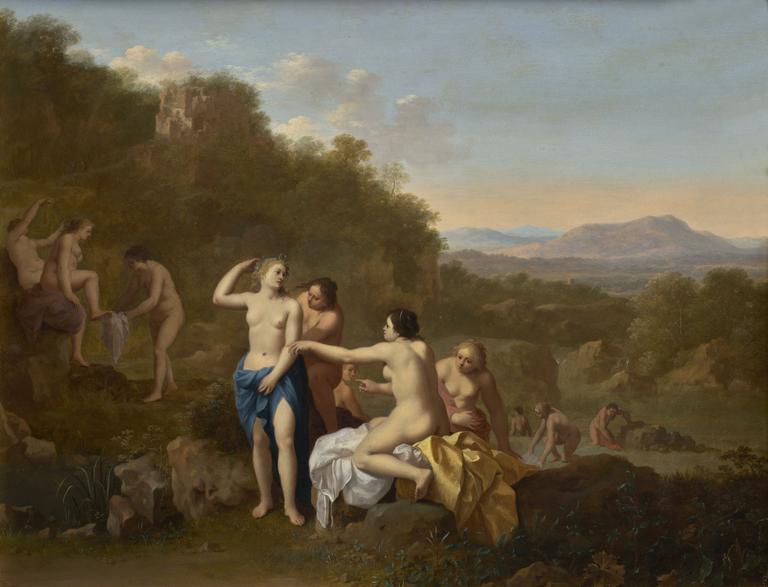 Diana and her Attendants at the Bath

The "Italianate painters" formed a distinctive trend in 17th-century Dutch painting. "Impressed", in the photographic sense of the word, by Italian light, they imbued their landscapes, genre scenes, biblical or mythological representations with it. Poelenburch is considered as the most important of the first generation of these painters. Co-founder of the Bentvueghels, the northern painters who lived a bohemian life in Rome, he took the nickname of "Satiro", the Satyr, not without a reference to the female nudes that filled his work, and perhaps his life. He spent 8 years in Rome (1617-1625), and the rest of his life (except for two stays in England, where Charles I of England called him) in Utrecht.

His popularity was immense until the beginning of the 19th century, as illustrated by the presence of this painting in the collection of Jean-Baptiste-Pierre Le Brun, whom the art historian Francis Haskell refers to as "the last, and possibly the greatest, in a long and distinguished line of 18th-century French dealer-connoisseurs" (Rediscoveries in Art, Cornell University, 1976). Le Brun had engraved it in 1793, in a fundamental work for the history of art and taste, the Galerie des peintres flamands, hollandais et allemands, with the comment "one of the most beautiful to do it" (i.e., the workmanship).

In fact, in this work of the maturity, probably from the 1640s, mythology is no longer more than a pretext, the painting only is the master of perception, almost as much as in Cézanne's Baigneuses. Poelenburch combines a skillful work of the perspective and a subtle harmony of colors, particularly the white, blue and yellow of the draperies.

A Landscape with Bathing Nudes, a copper of identical dimensions, almost a counterpart, is in the collection of the Getty Museum. Our painting also stayed in Los Angeles in the collection of Miklós Rózsa, an American composer, originally from  of Hungaria, author of the music for a hundred Hollywood movies, including Ben Hur.