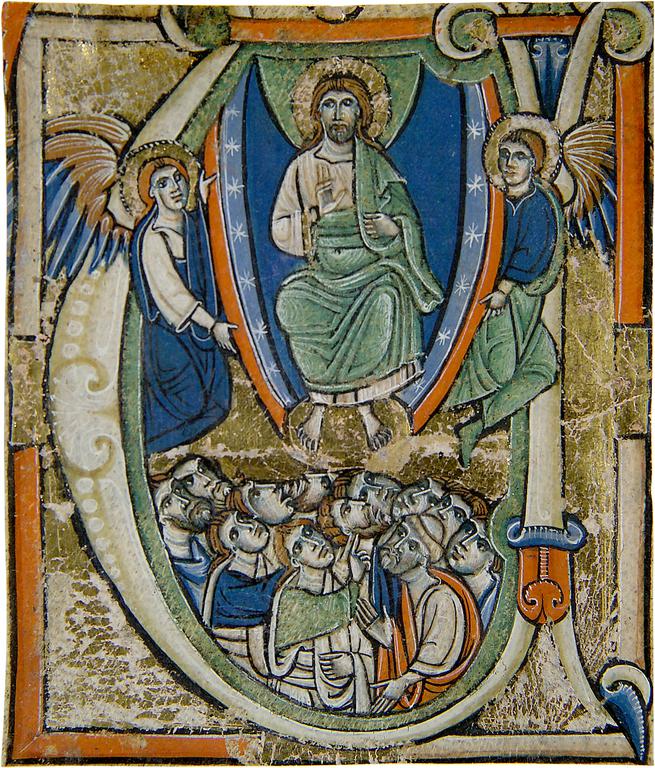 This historiated initial V, cut from a choir book, antiphonary or gradual, introduces the Mass of the Ascension and could correspond to one or other antiphon : "Viri Galilaei, quid aspicitis in coelum? Hic Jesus qui assumptus est a vobis in coelum, sic veniet...", "Videntibus illis elevatus est, et nubes suscepit eum in coelo...".

Of great quality of execution, this work presents close stylistic affinities with the productions of the Venetian-Paduan school of the middle of the 13th century, and can be compared, in particular,  with an antiphonary of San Marco executed towards the end of the second quarter of the 13th century, as well as The Epistolary of Johannes de Gaibana, illuminated by the Master of Gaibana in 1259 (Padua, Biblioteca capitolare), and related works such as the Oxford Psalter (Bodleian Library).

Influenced by the Byzantine tradition, these works offer most of the ingredients of Venetian-Paduan illumination, with figures with faces streaked with light and shadow, structured draperies, and tunics with flared necklines, their initials set in thick colored frames, their bright colors where the color red dominates, blue, green and their ornamentation of foliage with lobes enhanced by multiple white lines, of northern inspiration, so many features that we find in the initial of the Ascension.

Parallels can also be established with the mosaics of the atrium of St. Mark in Venice produced in the second half of the thirteenth century, especially in the treatment of draperies and faces – the appearance of the Lord at Babel, depicted on the northern vault of the bay at the entrance to the atrium, shows close resemblance to the Christ in Majesty of the initial, as well as to the early Bolognese style of illumination, developed from the middle of the 13th century and which shares common characteristics with Venetian-Paduan illumination.

These few markers suggest that this initial may have been executed in the Venetian region towards the end of the second quarter of the 13th century, probably after the Antiphonary of San Marco, one of the earliest attested examples of the Greek style, and before The Epistolary of Johannes de Gaibana, which is one of its most accomplished manifestations. This work enriches our knowledge of northeastern Italian illumination in the mid-13th century, at a time when artists were trying to break free from the Romanesque style and build a new language based on various influences from both the east and the north.