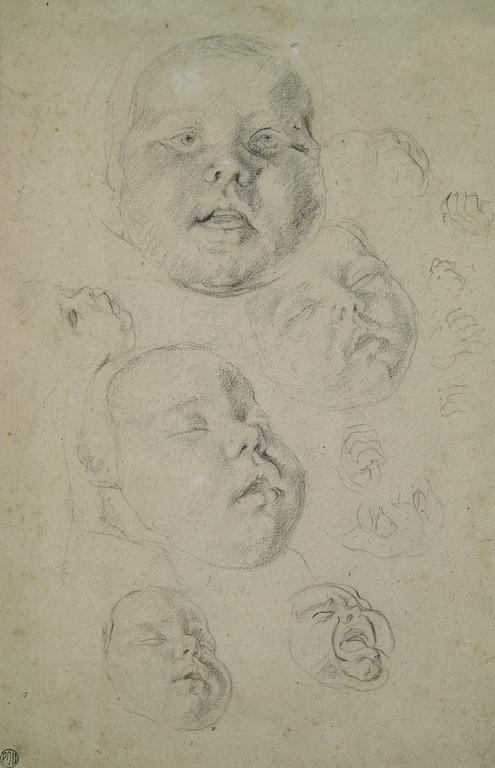 Study Sheet (Head and Hands of an Infant)

Cornelis de Vos is, with Rubens, van Dyck and Jordaens, the "fourth musketeer" of early 17th century Antwerp painting. Like van Dyck, he was a master of less exuberant portraits of a bourgeois milieu rather than an aristocratic one. And particularly the portrait of a child, alone or in the family circle, at a time when the extended family, the "clan", tended to be replaced by the "nuclear" family with children at its center.

Like about half of the drawings currently attributed to Cornelis de Vos, this one has always been exhibited as a van Dyck's. It was not until 1989 that the artist's specialist defined more precisely the graphic style clearly visible in that work, a strong contrast between the tightly hatching black pencil and the "reserve" of the paper, with highlights of white – and in his paintings too, children have something of the appearance of a moisturizer cream commercial.

This drawing, from the artist's full maturity, is preparatory to the 1627 Portrait of Susanne de Vos, the Painter’s Third Daughter (Frankfurt, Städel Institut). The child is "captured" in a variety of expressions, from peaceful sleep to crying, to the top of the sheet, where she is, like in the painting, awake and smiling. The layout is typical of a spontaneous study sheet guided by a very strong sense of space, and even volume, as much the third dimension is present.

At the beginning of the 20th century, it belonged to Charles Martine (1876-1936), curator at the École des Beaux-Arts, whose apartment on rue Bonaparte was, as a nephew recalled, "so full of paintings, books, papers and old objects that he stayed at the hotel". Then, it  entered in the collection of Pierre-Olivier Dubaut (1886-1968), an artist and draughtsman, whose tastes led him to the 19th century (David, Géricault, Delacroix), but who was able to recognize here a sensibility that could be said to be pre-romantic.