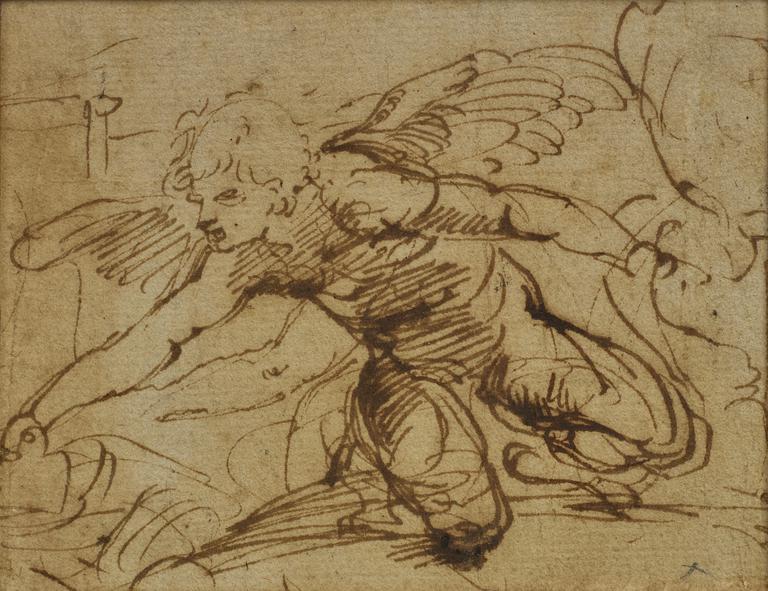 This drawing is obviously a fragment of a larger sheet, a "first thought" for a scene that included, in the upper right, the angel : perhaps an Annunciation, or the Holy Women at Christ's Tomb.

It strikes by its extreme energy. This angel does not simply participate in the decor, but in the action itself. There is haste, but no hesitation, even if it makes him look scrappy – which he is, in a certain way.

Rather than Annibale Carracci, to whom it was once attributed, we propose to attribute this drawing to his brother Agostino. The energy of the drawing, with its oblique lines and extensions, evokes Tintoretto's compositions, some of which were engraved by Agostino in Venice in the 1580s, so successfully that, according to Malvasia, the first biographer of the Carracci family, Tintoretto exclaimed that he "knew more than he did". We also find Agostino's "sometimes unpredictable" graphic style, as Catherine Loisel nicely wrote, the strongly accented pen stroke, the hatching and zigzags, the pointed nose, the sunken eye sockets, the hair reduced to a few strands, characteristic of the 1590s.

Agostino Carracci, who for a long time remained in the shadow of his brother Annibale and his cousin Ludovico, was nonetheless the mastermind of this trio who, with Caravaggio, revolutionized Italian painting around 1600, first in Bologna, where they were born, then in Rome. But he was first devoted to engraving, he died first, he did not have the charisma of his younger brother. It is only since the 1990s that his role has been re-evaluated and some drawings long considered to be Annibale's or made by the workshop have been re-attributed to him.

Ottoline Morrell, whose descendants kept this drawing until 2018, was the aristocrat of the Bloomsbury Group, a friend and patron of this group of non-conformist artists and writers of the early 20th century, who interested her infinitely more than her original family background (she was the half-sister of the 6th Duke of Portland). She had undoubtedly met John Charles Robinson, the previous owner, on the Dorset coast where the group took up summer residence from 1909 to 1912, and where he had retired after founding the future Victoria and Albert Museum and holding the position of Surveyor of the Queen's Pictures until 1901. "He was – writes Frits Lugt – one of the most sagacious and erudite connoisseurs of his time".