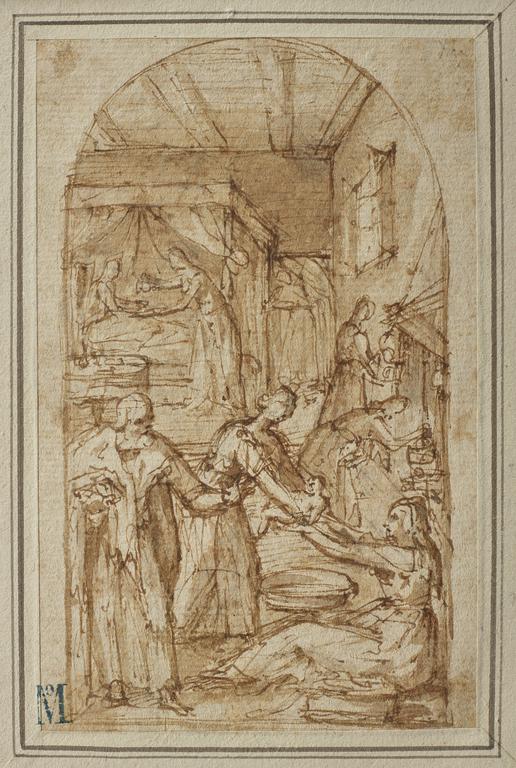 The Birth of Saint John the Baptist

This drawing has a well-known provenance – Giovanni Morelli, who was, in the 19th century, the first art historian to theorize the attribution of an unsigned, undocumented work to a given artist – but is itself, paradoxically, in search of an attribution.

Remaining for two generations, since the 1950s, in the exemplary Swiss collection of the pediatrician Robert Landolt, it was never exhibited until its sale in 2020 and has not received a well-deserved consideration.

It is a compositional drawing, a sketch which, as often, has the double characteristic of a small format and a freer handwriting than finished models or detailed studies. Its charm is due to the intimacy and naturalness of the scene, as well as to its quick and well conceived construction. Let us observe, for example, the rhythm of the three figures, leaning more and more to the right, which form a diagonal in depth in the lower part of the composition ; or how the woman in childbirth (Saint Elizabeth), wedged in her bed in the upper left-hand corner, is symmetrical, on a reduced scale, to the figure (certainly her cousin, the Virgin) who welcomes the newborn child in the lower right-hand corner.

The woman offering the child to another could be a reminiscence of Filippo Lippi's fresco Birth of St John the Baptist (Prato, Duomo) ; and the servant pulling aside a curtain, in the background of the room, of Andrea del Sarto's Birth of the Virgin (Florence, Santissima Annunziata).

This drawing is probably a birth of Saint John the Baptist. The two representations in Italian Renaissance painting are similar, with the difference that the birth of the Virgin is usually an exclusively female affair ; whereas St. John the Baptist's one involves the father, Zechariah, who "asking for tablets, wrote : John is his name" (Luke 1:63) – even though the gospel places this event 8 days after the birth, at the circumcision.

This drawing is also striking for its accentuated perspective and the role played by light. For these and other more "Morellian" reasons, we propose to attribute it to Lorenzo Lotto – notwithstanding the Florentine reminiscences : it is now admitted that Lotto stayed in Florence, probably in 1512, and perhaps on other occasions.

According to us, It seems to be very close, in the nervous graphic style, the flash effect, and even the framing line, to another compositional drawing that is quite unique among the thirty or so recognized drawings by the master, but whose attribution has never been disputed : An Ecclesiastic in his Study (London, British Museum).

By comparison with the Frescoes in the Suardi Chapel, which have the same anecdotal flavor, and the Birth of the Virgin (Bergamo, San Michele al Pozzo Bianco), where we find, more or less, the same bed, and the idea of the child tossed between two women, we propose to date it around 1525, which also corresponds to the dating of the London drawing.

We may add that Zechariah, with his bald forehead and beard in a collar, seems to be eminently a "Lotto-like" type, as can be seen, for example, in the Saint Peter of the Transfiguration (Recanati, Museo Civici) ... but also in the Saint Joseph of the Rest during the Flight into Egypt, a drawing passed from the Morelli collection to the Museo del Castello Sforzesco (Milan), which is still anonymous, but, according to us, can be attributed to Lotto as well.