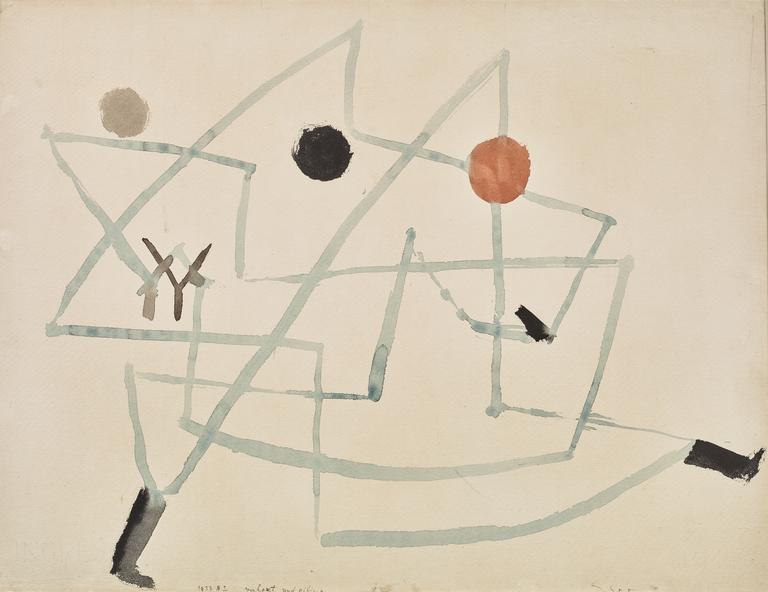 This work, its iconography, its provenance, sums up a "Klee moment", if you will excuse the pun. Germany, where Klee had settled in 1898 (with an interlude in Switzerland, his ntive country, from 1902 to 1906), switched from the Weimar Republic to the Third Reich after Hitler's accession to the chancellorship at the end of January 1933. Klee, who is denounced as a "degenerate" artist, is dismissed at the end of April from his position at the Kunstakademie in Düsseldorf. He signed a contract with Daniel-Henry Kahnweiler, the first and greatest of the modern art dealers, and then, at the end of December, resigned himself to returning to Switzerland.

The watercolor had been possessed by only three owners : Lily Klee, the artist's widow and her foundation ; Daniel-Henry Kahnweiler and the Louise Leiris gallery he had created ; and Alfred Neven DuMont, who died in 2015, a Rhineland press and publishing magnate who owned, among other things, the Kölner Stadt-Anzeigen.

It is no coincidence that DuMont, a great collector of modern art, a close friend of all the post-war German chancellors (from Adenauer to Merkel) and editor of several books about Klee, chose this work. No doubt he appreciated its rare graphic style, half-abstract, half-figurative (like Miró), which is hardly to be found in other works from 1933. Above all, in a few astonishingly dynamic lines, Klee says, or rather, makes visible without words ("art does not reproduce the visible, it makes visible", he had written in 1920), this moment when Germany was changing.

We can guess two figures dancing on a rhythm, perhaps, of fox-trot. This is the Germany of the 1920s, Pabst's films, whose best commentator, the critic Siegfried Kracauer, wrote that "in the nightclub scenes he suggests the emptiness of his characters by the emptiness that surrounds them" (From Caligari to Hitler, Princeton, 1947). This is what is surprising here, at first sight, in Klee who usually proceeds by additions and nuances until he fills the space.

But is it a foxtrot rhythm or a goosestep, suggested by the black boots (and perhaps a moustache) ? As for the three grey, black and brown dots, they evoke a head, eyes, a nervous center that moves with the figures, but also the colors of political extremism and this "grey dot" dear to Klee who described it in 1926 as "the fateful point between what becomes and what dies".

Carl Einstein, the first theorist of modern art, believed that Klee's art found "the same magical and prophetic force" as childhood or primitive societies. "The titles of Klee", he continued, "give the impression of being old magic names (...). They delimit at first sight the experience of the painting" (Art of the 20th Century, Berlin, 1931). Klee's own title at the bottom of this work, Verhext und eilig, word for word "Bewitched and Pressed", adds to this worried magic.